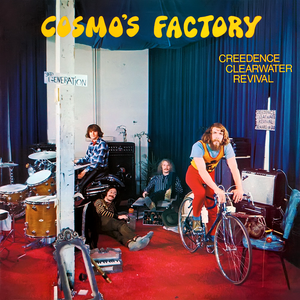 Cosmo's Factory is the fifth album by American band Creedence Clearwater Revival, released in 1970. The name of the album comes from the warehouse in Berkeley where the band rehearsed. Bandleader John Fogerty was so insistent on practicing (nearly every day) that drummer Doug "Cosmo" Clifford began referring to the place as "the factory". Early pressings of the album contain a three-second dropout on the left stereo channel during "Before You Accuse Me" and an earlier mix of "Travelin' Band" with John Fogerty's first solo mixed behind the horn section. This mix was restored on the 40th anniversary reissue. Timeline Recording for "Cosmo's Factory" began shortly after the release of their fourth album Willy and the Poor Boys. The album's first single "Travelin' Band/Who'll Stop the Rain" was released in January of 1970, seven months before the release of the album, and became the band's fifth gold single. In April CCR went on their first European tour and released their sixth gold single "Up Around the Bend/Run Through the Jungle", four months before the album's release. Then in July the band released the album, which became their fourth platinum album, and "Lookin' Out My Back Door/Long As I Can See The Light", their seventh gold selling single. The song "I Heard it Through the Grapevine" was released as a single in an edited version in January 1976. User-contributed text is available under the Creative Commons By-SA License; additional terms may apply.