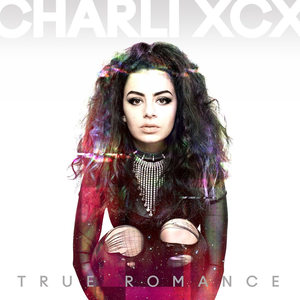 True Romance is the debut studio album by English singer and songwriter Charli XCX, released on 12 April 2013 by Asylum and Atlantic Records. Originally scheduled for release in April 2012, the album's release was delayed for a full year and had been in the making since early 2010 when Charli met with producer Ariel Rechtshaid in Los Angeles. To promote the album's release, Charli embarked on a three-date UK promotional tour in April 2013. "You're the One" has been compared to Siouxsie and the Banshees' 1991 song "Kiss Them for Me" and Charli agreed: "At the time, I was listening to a lot of dark pop, so I was inspired by a lot of the deep bass sounds. Sure, Siouxsie is there, too. We just kind of rolled with it." Charli explained the meaning being the album's title: "Every corner of my own romantic history is explored on this record, so for me, it's very raw, it's very honest, and it's very true." The majority of the album's tracks was previously released on the You're the One EP, and through the Heartbreaks and Earthquakes and Super Ultra mixtapes.> The album is named after the Quentin Tarantino-written 1993 film of the same name, which is sampled on "Velvet Dreaming" from the Super Ultra mixtape. On 9 April 2013, the standard edition of album became available to stream on Pitchfork Media in full. User-contributed text is available under the Creative Commons By-SA License; additional terms may apply.