Album: All The Right Reasons 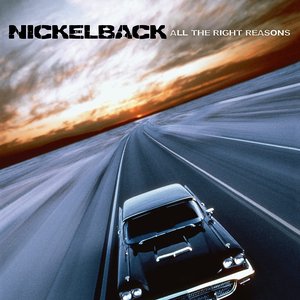 All the Right Reasons is the fifth studio album by Canadian rock band Nickelback, released on October 4, 2005. It is the band's first album with former 3 Doors Down drummer Daniel Adair, who replaced Ryan Vikedal in January 2005. The album topped the Canadian Albums Chart and the American Billboard 200 albums chart and has sold over 11 million copies worldwide, according to certifications from the CRIA, the RIAA and the BPI. Seven singles were released from the album, of which four reached number one or two on the Canadian Singles Chart. The album re-entered the Finland Albums Chart 5 years after its release, setting also a new peak position, at #21. All the Right Reasons was certified 8x Platinum by the RIAA on October 7, 2009, making it one of the top 200 best-selling albums of all time in the US. In the US, All the Right Reasons had sold 7,378,327 copies. In Canada All the Right Reasons was certified 7x Platinum by the CRIA in March 2010. The album was the third straight No. 1 album for the band in their native Canada selling more than 60,000 copies in its first week topping their previous albums Silver Side Up and The Long Road which also hit No. 1, "Silver Side Up" opened with 43,000 copies and "The Long Road" with 45,000 copies. In the United States the album to date has sold over 6.8 million copies and was found again inside the top 10 of the Billboard 200 in its 99th, 100th, 101st, and 102nd weeks on the chart. The album had never been below #30 on the Billboard 200 in 110 weeks, making Nickelback the first act to have an album in the top thirty of the Billboard 200 for its first 100 weeks since Shania Twain's album, "Come on Over" stayed in the top thirty for 123 consecutive weeks following its release. Billboard Magazine called the album "the biggest rock album of the century so far." In addition the album has spawned five top twenty Hot 100 singles in the U.S., ("Photograph", "Savin' Me", "Far Away", "If Everyone Cared", and "Rockstar"), making it one of only a handful of rock albums to ever produce five or more top twenty U.S. hits. "Photograph", "Far Away", and "Rockstar" were all top ten singles on the Hot 100, making Nickelback the first rock band of 2000s to have three top ten hits from the same album. In the UK, the album opened its chart run at #13 before quickly leaving the top 75 with no top 20 singles, with "Savin' Me" being their first to miss the top 75 altogether. While being their smallest-selling UK album since "Curb", it experienced, in early 2008, a resurrection due to the single "Rockstar" becoming Nickelback's highest charting single ever in the UK. The album has now outpeaked its previous peak of #13, reaching #2 and has since been certified Platinum It was ranked #13 on Billboard's 200 Albums of the Decade. In contrast to its high sales, All the Right Reasons received a "mixed to negative score" of 41 based on 9 critics and a 4.2 out of 10 from users on Metacritic, making it the 21st lowest rated album since records on the site began. The album also jump started the worldwide hatred-phenomenon towards Nickelback and their music. Despite the mostly negative reviews, Entertainment Weekly explained the album's success this way: "What if Nickelback's decision to let the music speak for itself is, ironically, their biggest selling point of all?" The special edition of this album was released on July 10, 2007. It features in 2-Disc set: Exclusive live bonus track, ringtone of "Photograph", Nickelback wallpaper plus three unreleased live tracks and one remix version of "Photograph". Bonus DVD includes four videos, behind-the-scenes tour diary and interviews. * "Next Contestant" had been performed live several years before the release of this album. * "Follow You Home" and "Rockstar" feature vocals and guitar from Billy Gibbons of ZZ Top. * "Side of a Bullet" contains lyrics dedicated to Dimebag Darrell and a guitar solo from the Far Beyond Driven era of Dimebag's band, Pantera. * "We Will Rock You" is a Queen cover and is available exclusively from Wal-Mart (a download voucher was inserted in the packaging for instore sales or the song could be downloaded with complete album download purchase from the Website). * Wal-Mart also bundled an exclusive DVD, "Nickelback - Photo Album", with the album when it was released. * The car driving down the highway on the cover is a black 1960 Ford Thunderbird. * "Savin' Me" is used on The Condemned movie soundtrack. User-contributed text is available under the Creative Commons By-SA License; additional terms may apply.