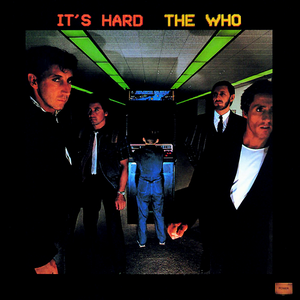 It's Hard is the tenth studio album by the English rock band The Who. It is the last Who album to feature bassist John Entwistle and drummer Kenney Jones, as well as the last Who album to be released on Warner Bros. Records in the United States. It is also their last album until 2006's Endless Wire. It was released in 1982 on Polydor in the UK, peaking at number 11, and released on Warner Bros. in the US where it peaked at number 8 on the Billboard Pop Albums charts. The US rights to both this album and Face Dances subsequently reverted to the band, who then licensed them to MCA Records for reissue. The album received a five-star review in Rolling Stone. The first track, "Athena" peaked at number 28 on the Billboard Pop Singles charts. The album cover, designed by Graham Hughes, depicts a young boy playing Atari's Space Duel arcade game. It is a reference to Tommy, with the pinball machine that the main character played updated to the times. In 1997, MCA re-released the album with new mixes for "Athena" and "Eminence Front" that corrected problems with the original 1982 mix. The lead vocals on both songs had been hard-panned to opposite channels, and Townshend and Daltrey shared a vocal flub on "Eminence Front." Pete Townshend has been sometimes noted to give a brief history of "Eminence Front" before playing it in concert. He would explain what the song was about, and finish by saying the album's name (It's Hard). User-contributed text is available under the Creative Commons By-SA License; additional terms may apply.