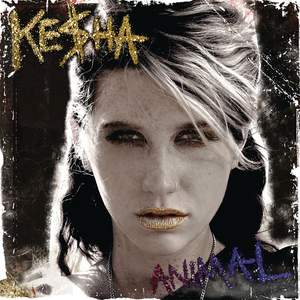 Animal is the debut studio album by American singer and songwriter Kesha. The album was released on January 1, 2010 through RCA Records and distributed through Sony Music Entertainment. Kesha worked with a variety of record producers and songwriters such as Lukasz "Dr. Luke" Gottwald, Benny Blanco, David Gamson, Greg Kurstin, Max Martin and others. Kesha had been recording demos for several years when one eventually ended up in the hands of Samantha Cox, senior director of writer/publisher relations at BMI. Cox passed along the demo and it ended up in the hands of Gottwald, who decided to have Kesha perform on the song "Right Round". Within two months, the song became a hit in multiple countries around the world. The event led to Kesha being sought after by many major labels, and she eventually signed a multi-album deal with RCA Records. Musically, Animal draws from the electropop genre, while incorporating elements of dance-pop in its production and beats. Lyrically, the majority of the album's songs are based on Kesha's past life experiences of love, heartbreak, boys, and having a good time. The album received mixed reviews from music critics. Some appreciated its fun, carefree nature, while others dismissed it as juvenile and said that it seemed insincere. The album attained chart success, debuting at number one on Canadian Albums Chart, US Billboard 200 and IFPI Greece Albums Chart, while charting within the top ten in seven other countries. Animal was certified platinum by the Recording Industry Association of America (RIAA) for shipments of one million copies to the United States and has sold over four million copies worldwide. Four singles were released from the album. Its lead single, "Tik Tok", was released on August 7, 2009 and was a worldwide hit, reaching number one in eleven countries. It reached number one on the US Billboard Hot 100 and stayed at the top for nine consecutive weeks. The song sold 12.8 million digital copies worldwide in 2010, making it the best-selling single of the year; it has sold 6,800,000 downloads in the United States alone, making it the sixth best-selling song in digital history. It has now sold over fifteen million copies worldwide, and as of August 7, 2014 (exactly five years after its release), it's the second best-selling digital single worldwide. The album's second, third and fourth singles, "Blah Blah Blah", "Your Love Is My Drug" and "Take It Off" all achieved similar success reaching the top ten in multiple countries including Australia, Canada and the United States. The album's commercial success led to its nomination for the Juno Award for Best International Album at Juno Awards of 2011. User-contributed text is available under the Creative Commons By-SA License; additional terms may apply.