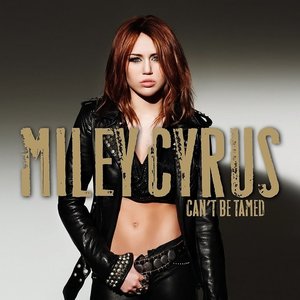 Can't Be Tamed is the third studio album by American recording artist Miley Cyrus, first released on June 18, 2010 by Hollywood Records. Writing and recording commenced while Cyrus traveled on the 2009 Wonder World Tour. 19 live performances and backstage interviews from a performance at London's O2 Arena are featured on the second disc of the deluxe edition of Can't Be Tamed. The albums' producers include longtime collaborators Antonina Armato, Tim James, and John Shanks. Musically, Can't Be Tamed ranges from acoustic ballads to dance-pop numbers. The tracks share a theme of breaking free of constraints and expectations. Can't Be Tamed debuted at number three on the Billboard 200, at number eight on the UK Albums Chart and at number four in the German. The album's lead single and title track, "Can't Be Tamed", was released on May 18, 2010. It debuted at number eight on the Billboard Hot 100 and number five also on the New Zealand Singles Chart and was the only worldwide single in this project. The second, "Who Owns My Heart", was released as single only in Europe on October 26, 2010. Promotion was primarily through concerts and television appearances. User-contributed text is available under the Creative Commons By-SA License; additional terms may apply.