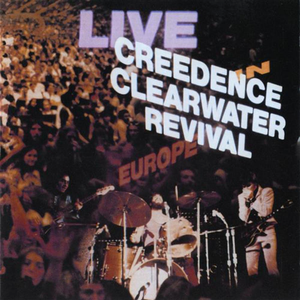 Live in Europe was originally a 2-LP release from 1973. This places it after the original band's breakup. Indeed, the recordings found here are from one of CCR's final tours, and documents the band as a trio (Tom Fogerty having already quit). Until relatively recently, this was thought of by most fans and critics as a lesser release. It was rather short (under an hour) for a double album, and the missing Fogerty irked purists. It wasn't until 1998 that a Japanese remastering effort revealed that part of the perceived problems was in the sound quality, and not the performance. The performance itself is mainly a greatest hits run-through. Several familiar classics are here, such as "Proud Mary" and "Green River", but these are supplemented by a few lesser-known tracks like "It Came From The Sky" and "Door to Door". User-contributed text is available under the Creative Commons By-SA License; additional terms may apply.