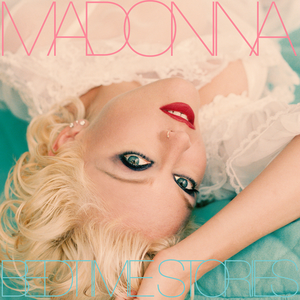 Bedtime Stories is the sixth studio album by American singer Madonna. It was released on October 25, 1994, by Maverick Records. Madonna collaborated with Dallas Austin, Babyface, Dave "Jam" Hall, and Nellee Hooper in order to move into more mainstream sound. The success of the soundtrack single "I'll Remember" in 1994 marked the beginning of this transformation and Madonna used Bedtime Stories to continue it. Like its predecessor Erotica, the album explores lyrical themes of love, sorrow, and romance, but with a toned-down, less sexual approach. Critics described the album as "autobiographical", as the song "Human Nature" addresses the controversy surrounding Erotica. Madonna also worked with Icelandic singer-songwriter BjĂ¶rk, as she wanted to explore the British club musical scene, where genres such as dub had been growing in popularity. The lead single from the album, "Secret", gave Madonna her record-breaking 35th consecutive top ten single on the UK Singles Chart, while "Take a Bow" spent seven weeks at number one on the US Billboard Hot 100. Other singles released, "Bedtime Story" and "Human Nature", did not match the previous singles' success. In order to further promote Bedtime Stories, Madonna performed songs from the album on the American Music Awards of 1995 and the 1995 Brit Awards. A concert tour was also planned, but did not take place due to Madonna acquiring the title role in the 1996 musical film, Evita. User-contributed text is available under the Creative Commons By-SA License; additional terms may apply.