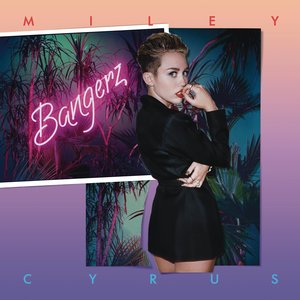 Bangerz is the fourth studio album by American recording artist Miley Cyrus, released on October 4, 2013 by RCA Records. Opting to reestablish her music career instead of focusing on her film career as originally planned, Cyrus began planning the project in 2012. Work continued into 2013, at which time she left her previous label Hollywood Records and subsequently joined RCA Records. Described by Cyrus as "dirty south hip-hop", Bangerz represents a musical departure from her earlier work, which she has grown to feel "disconnected" from. She considered it to be her debut record, having been her first released since the conclusion of Hannah Montana. As executive producers, Cyrus and Mike Will Made It collaborated with hip hop producers including Cirkut, Pharrell Williams, and will.i.am to achieve Cyrus' desired new sound. Their efforts resulted in a primarily pop record, which sees additional influences from hip hop and country music. The lyrical themes revolve largely around romance, which were reportedly inspired by Cyrus' former fiancĂŠ Liam Hemsworth. Furthermore, the record features guest vocals from several new partners, including pop singer Britney Spears and rappers Big Sean, French Montana, Future, Ludacris, and Nelly. Upon its release, Bangerz received generally favorable reviews from music critics, who appreciated its overall production and originality, but were ambivalent towards Cyrus' public persona. Two singles have been released from Bangerz thus far. The lead single "We Can't Stop" was released on June 3, 2013, and peaked at number two on the US Billboard Hot 100. The second single "Wrecking Ball" was released on August 25, 2013, and became Cyrus' first single to peak in the top position in the United States. Its accompanying music video currently holds the Vevo record for most views in the first 24 hours of its release, and the record for being the fastest video to reach 100 million views on the service. Promotional efforts for Bangerz continued to associate Cyrus with an increasingly provocative image, an effort first begun with her third record Can't Be Tamed (2010). She garnered widespread media attention through a controversial performance at the 2013 MTV Video Music Awards, and was later the host and musical guest during an episode of Saturday Night Live. User-contributed text is available under the Creative Commons By-SA License; additional terms may apply.