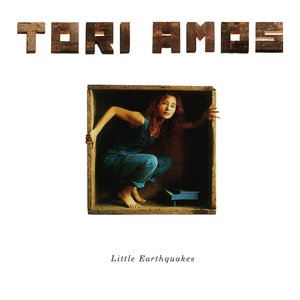 Little Earthquakes is the debut solo album of singer-songwriter Tori Amos, featuring the singles Silent All These Years, China, Winter and Crucify. The album was first released in the UK on January 13, 1992. Following the dissolution of her synth-pop band Y Kant Tori Read, Amos composed 12 songs, recorded them at Capitol Records in Los Angeles with Davitt Sigerson producing, and in June 1990 submitted them for copyright. Amos approached Atlantic Records in December 1990 with a 10-track demo tape, some being newer songs but mostly ones from June. The track listing consisted of Russia (later to become Take to the Sky), Mary, Crucify, Happy Phantom, Leather, Winter, Sweet Dreams, Song for Eric, Learn to Fly and Flying Dutchman. Atlantic was unhappy with the songs, and in response Amos and her then boyfriend Eric Rosse recorded some new songs, including Girl, Precious Things, Tear In Your Hand and Little Earthquakes. The song Take Me With You was recorded during these sessions, but not released until 2006 (with re-recorded vocals.) This session was recorded on a limited budget in Rosse's home studio, using his 3M 24-track analog tape machine and a Yamaha CP-80 piano. Amos and Rosse also went to Stag Studios to use a Yamaha grand piano. Satisfied with these recordings, Atlantic determined that the album Little Earthquakes would have 13 tracks, removing Learning to Fly and adding four from the December recording session. Amos moved to London to work with Ian Stanley; Atlantic thought Amos would have an easier time of achieving success, because of English appreciation for eccentric performers. Here she recorded what would become two of her early singles. Me And A Gun was the last song written for the album, while China was an early track, originally titled Distance, that she wrote in 1987. The second final version of the album was accepted by the record company. However, this was still revised before the final release; a 13-track promo cassette shows that the song Little Earthquakes was to appear after Happy Phantom on side one, with side two closing with Flying Dutchman. The latter track was presumably dropped due to the physical restraints of the vinyl LP format. Atlantic's European counterpart, East West, promoted the record extensively. Amos spent much of 1991 performing in small bars and clubs in London and playing for music executives and journalists, often in her own apartment. The Me and a Gun EP containing four tracks was released in October 1991, receiving considerable critical attention. The single was re-issued the following month with Silent All These Years as the lead composition, and it became her first chart entry at UK number 51 following Single of the Week support from BBC Radio 1 and a TV debut on the high-rated chat show of Jonathan Ross on Channel 4. The back cover of the album contains pictures of phallus mushrooms, also known as stinkhorns. User-contributed text is available under the Creative Commons By-SA License; additional terms may apply.