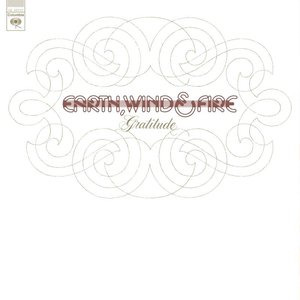 Gratitude is a double album by the band Earth, Wind & Fire. Three sides are live and the fourth side contains four new studio tracks, including the singles Sing a Song and Can't Hide Love (a cover of a song by Creative Source. The album was released on November 11, 1975, and re-issued on May 9, 2000. The album spent three weeks at number one on the Billboard Pop Albums Chart, six non-consecutive weeks at number one on the Soul/Black Albums chart and has been certified triple platinum by the RIAA. Gratitude was also the 2nd bestselling R&B album of 1976. The band was Grammy nominated for Best R&B Vocal Performance By A Duo, Group or Chorus for the title track, Gratitude and "Can't Hide Love" was also Grammy nominated for Best Arrangement For Voices. Earth, Wind & Fire also won a Rock Music Award in the category of Best Soul Album for Gratitude. User-contributed text is available under the Creative Commons By-SA License; additional terms may apply.