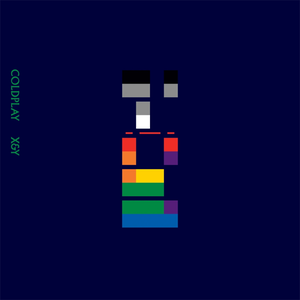 X&Y is the third studio album by English alternative rock band Coldplay, released 7 June 2005 in the United Kingdom via the record label Parlophone. The album, which features influences of electronic music, was produced by the band and British record producer Danton Supple. British record producer Ken Nelson was supposed to produce much of the album, however, many songs written during their sessions were ditched due to the band's dissatisfaction. The album's cover art is a combination of colours and blocks, which is a representation of the Baudot code. The code should mean "X&Y", but it is misspelled. It actually means "X9Y". The album has been considered a landmark achievement of the band, topping many charts worldwide, including the United Kingdom and United States, the latter being their first. With accumulated sales of over 8.3 million units, X&Y is 2005's best-selling album worldwide. Reviews for the album were mixed; many critics felt X&Y fell short of its predecessor, A Rush of Blood to the Head. The album has spawned the singles "Speed of Sound", "Fix You", "Talk", "The Hardest Part", "What If", and "White Shadows". Special Dutch Edition The Dutch edition contains a second disk with the following songs: "Things I Don't Understand" "Proof" "The World Turned Upside Down" "Pour Me" (live @ the Hollywood Bowl) "Sleeping Sun" "Gravity" User-contributed text is available under the Creative Commons By-SA License; additional terms may apply.