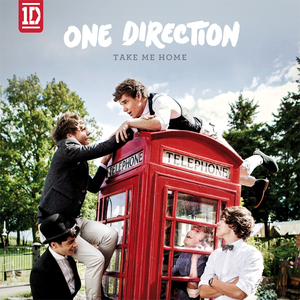 Take Me Home is the second studio album by English-Irish boy band One Direction, released globally in November 2012 by Syco Records and Columbia Records (Sony Music Entertainment). After extensive promotional appearances and touring in North America and Oceania in support of their debut album, One Direction began recording the album in May 2012. As a follow-up to One Direction's internationally successful debut album Up All Night (2011), several writers and producers were enlisted, including Carl Falk, Rami Yacoub, Savan Kotecha, Ed Sheeran, Jake Gosling, and Tom Fletcher. The album is predominantly a pop music album, interpolating elements of pop rock, dance-pop, teen pop and power pop. The album received generally favourable reviews from contemporary music critics. Take Me Home topped the charts in more than thirty-five countries including Australia, Canada, the United Kingdom, and the United States, sold over one million copies worldwide in its first week of release, and received a multitude of certifications across the globe. When Take Me Home topped the 1 million mark in US sales on the week ending 16 December 2012, One Direction became the first act to sell 1 million copies of two different albums in a calendar year since 2009. Their debut album Up All Night became the third best-selling album (1,616,000) and Take Me Home the fifth best-selling album (1,340,000) of 2012 in the United States, making the vocal quintet the first act to place two albums in the year-end top five in the Nielsen SoundScan era. The lead single, "Live While We're Young", released on 28 September 2012, peaked inside the top ten in almost every country it charted and recorded the highest one-week opening sales figure for a song by a non-American artist. The album's second single, "Little Things", released on December 3, 2012, became the group's second number-one hit in the United Kingdom. "Kiss You" will be released as the album's third single on 8 February 2013. Staged in support of the record, One Direction performed the album's songs on several television programs. The album's accompanying seven-month 2013 World Tour is scheduled to begin in February 2013. User-contributed text is available under the Creative Commons By-SA License; additional terms may apply.