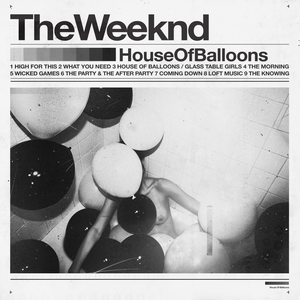 House of Balloons is the debut mixtape of Canadian artist, The Weeknd, released online for free in March 21, 2011. Production was headed up by Canadian producers Doc McKinney, Zodiac, Illangelo. House of Balloons blends a range of electronic and urban genres including R&B and soul. The title track is based on the music of the hit single "Happy House" by Siouxsie and the Banshees. Upon its release, House of Balloons garnered much acclaim among critics and fans alike. Preceded by a string of low-profile buzz single releases throughout 2010, the identity behind The Weeknd was kept secret from the public which attracted significant interest. House of Balloons received the 'Best New Music' title at Pitchfork.com. Metacritic, which assigns a normalised rating based on reviews by industry professionals, gave House of Balloons a rating of 87 based on 16 reviews indicating 'Universal Acclaim,' also making it the third highest scoring R&B release ever. In December of 2011, Metacritic determined that House of Balloons was the third best-reviewed project of the year. User-contributed text is available under the Creative Commons By-SA License; additional terms may apply.