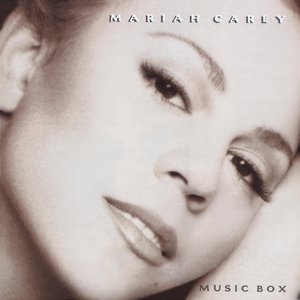 Music Box is the third studio album by American singer Mariah Carey. It was released by Columbia Records on August 31, 1993, in North America. The album comprises ballads primarily co-written by Carey and Walter Afanasieff, with whom she had previously worked on Emotions (1991), and a few urban dance tracks. During the course of the album's development, Carey wanted to broaden her audience, choosing a more pop/R&B oriented sound. During this time frame, she experimented with different musical instruments, leading the album's sound away from her more contemporary previous two efforts. Two unused tracks from the album sessions were released as B-sides: "Do You Think of Me" and "Everything Fades Away". After its release, Music Box received generally mixed reviews from music critics. The album faced criticism regarding Carey's more mellow and lazy tone in comparison to her previous work. Commercially, the album reached number one in Australia, Austria, Belgium, Denmark, Finland, France, Germany, Ireland, the Netherlands, Portugal, Scotland, Switzerland, the United Kingdom, and the United States. The Recording Industry Association of America (RIAA) certified it Diamond, for shipments of ten million copies across the United States. Music Box remains Carey's highest seller with 32 million copies sold worldwide and is one of the best-selling albums of all time. User-contributed text is available under the Creative Commons By-SA License; additional terms may apply.