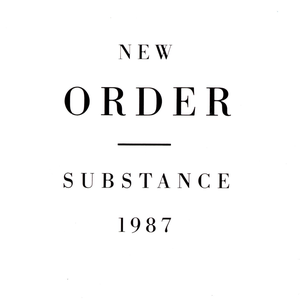 Substance is a 1987 double compilation album by New Order, consisting of all of the band's singles at that point in their 12-inch versions, together with their respective B-side tracks. The then newly-released non-album single "True Faith" is also featured, along with its B-side "1963". The collection was released on vinyl, double CD, double cassette and Digital Audio Tape. While Substance presents a sizeable collection of singles, there are many omissions and differences to be found from the original single releases: * The versions of "Temptation" and "Confusion" were re-recorded in 1987 especially for Substance and the original versions do not appear. * "Ceremony" is the version recorded after Gillian Gilbert joined the band. The original trio version — the first New Order recording following the dissolution of Joy Division — would not be re-released until the Singles collection in 2005. * "Procession" and "Murder", despite being A-side singles, are only present on the second B-side half of Substance, for unknown reasons. * "Shellshock" and "Hurt" are both edited by a couple of minutes each on all versions of the album. "The Perfect Kiss" has around 40 seconds edited on the CD version, but the full unedited version is included on the vinyl LP version of the album. The version of "Sub-culture" featured is not the full 12" version. Rather it is an edit that was previously included on Benelux editions of the single. * "Cries and Whispers" is incorrectly labelled as "Mesh" on all versions, and only on the cassette version does the original "Mesh" actually appear, itself mistitled as "Cries and Whispers" (to add to the confusion, the iTunes Store release, based from the CD version, labels the song "Mesh (Cries and Whispers)"). The standard tape version, due to the extra space befitting the format, also contains extra tracks in the form of "Dub-vulture", "Shellcock", and "Bizarre Dub Triangle", as well as the original "Mesh". Only on the limited edition cassette version does "True Dub" appear, as the last track on the second tape. On all cassette versions, "Murder" is after "Thieves Like Us" on the first cassette, whereas on the CD/DAT versions it is a track on the second half of the album. User-contributed text is available under the Creative Commons By-SA License; additional terms may apply.