Album: Another Side of Bob Dylan 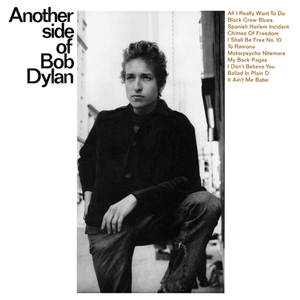 Another Side of Bob Dylan is Bob Dylan's fourth studio album, released in 1964 by Columbia Records. Consistent with its title, the album marks a shift away from the more overt, issue-oriented folk music that Dylan had previously been gravitating toward, dominating his previous LP, The Times They Are A-Changin'. This break from traditionalist roots prompted sharp criticism from influential figures in the folk community. Sing Out! editor Irwin Silber famously complained that Dylan had "somehow lost touch with people" and was tangled up in "the paraphernalia of fame". Most critics outside of these circles, however, praised its innovations in songwriting, which would have a tremendous influence on such legendary rock acts as The Beatles. Despite the major thematic changes, Dylan still performed his songs solo, with acoustic guitar and harmonica, and even piano on one song. Another Side of Bob Dylan reached #43 in the US (although it eventually went gold), and peaked at #8 on the UK charts in 1965. User-contributed text is available under the Creative Commons By-SA License; additional terms may apply.