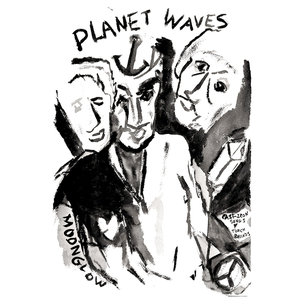 Planet Waves is singer-songwriter Bob Dylan's 14th studio album, released by Asylum Records (Island Records in the UK) in January 1974. Dylan is supported on the album by longtime collaborators The Band, with whom he embarked on a major reunion tour following its release (documented on the live album Before the Flood.) With a successful tour and a host of publicity, Planet Waves was a hit, enjoying a brief stay at #1 on the US Billboard charts - a first for the artist - and #7 in the UK. Critics were not negative, as they had been with some recent Bob Dylan albums (namely Self Portrait and Dylan), but still not enthusiastic for the album's brand of laid-back roots rock. The album was originally set to be titled Ceremonies Of The Horsemen, a reference to the song "Love Minus Zero/No Limit", from the 1965 album Bringing It All Back Home; the release was delayed two weeks when Dylan decided to change the title at the last minute. User-contributed text is available under the Creative Commons By-SA License; additional terms may apply.