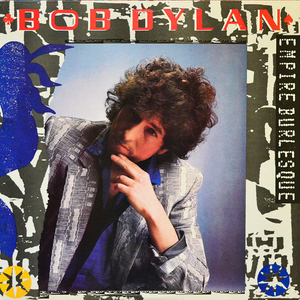 Empire Burlesque is singer-songwriter Bob Dylan's 23rd studio album, released by Columbia Records in June 1985. The production techniques used on Empire Burlesque are typical of the 1980s, and contemporary critics find it to be one of the few Dylan albums that now sound quite dated. However, the songwriting is generally considered to be some of Dylan's strongest of the decade, with such notable compositions as "Tight Connection to My Heart" and "Dark Eyes." Fans and critics continue to debate the album's merits, especially when compared to Dylan's classics of the 1960s and 1970s. It's one of Dylan's most controversial albums in terms of quality. The album peaked at #33 in the US and #11 in the UK. The album was unavailable on iTunes until 2006, when it was added as a part of the Bob Dylan: The Collection series, but when that was discontinued in 2009, it was made available by itself. User-contributed text is available under the Creative Commons By-SA License; additional terms may apply.