Album: Bringing It All Back Home 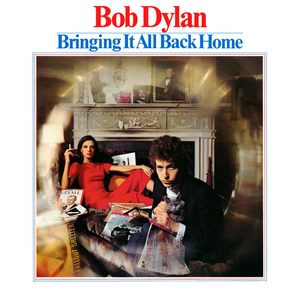 Bringing It All Back Home is Bob Dylan's fifth studio album, released in 1965 by Columbia Records. The album is divided into an electric and an acoustic side. On side one of the original LP, Dylan is backed by an electric rock and roll band - a move that further alienated him from some of his former peers in the folk song community. Likewise, on the acoustic second side of the album, he distanced himself from the protest songs with which he had become closely identified (such as "Blowin' in the Wind" and "A Hard Rain's a-Gonna Fall"), as his lyrics continued their trend toward the abstract and personal. Bringing It All Back Home is often cited as the birth of folk rock, and one of the peak albums of Dylan's career. The album reached #6 on Billboard's Pop Albums chart, the first of Dylan's LPs to break into the US top 10. It also topped the UK charts later that Spring. The lead-off track, "Subterranean Homesick Blues", became Dylan's first single to chart in the US, peaking at #39. User-contributed text is available under the Creative Commons By-SA License; additional terms may apply.