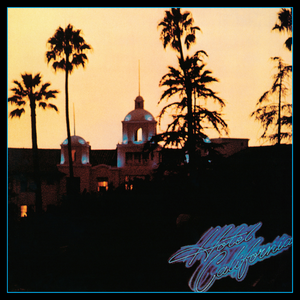 Hotel California is an album released by the American rock band Eagles in late 1976. It is the first Eagles album without founding member Bernie Leadon and the first album with Joe Walsh. It is also the last album featuring original bass player and singer Randy Meisner. Hotel California was the Eagles' fifth album of original material and became a critical success and a major commercial hit; since its release in late 1976, it has sold over 16 million copies in the U.S. alone. The album was at #1 for eight weeks in early 1977 (non-consecutively), and included two tracks which became #1 hits as singles on the Billboard Hot 100: "New Kid in Town", on February 26, 1977, and "Hotel California" on May 7, 1977. In 2001 the TV network VH1 named Hotel California #38 on 100 Greatest Albums of all time. Hotel California was ranked 13th in a 2005 survey held by British television's Channel 4 to determine the 100 greatest albums of all time. In 2003, the album was ranked number 37 on Rolling Stone magazine's list of the 500 greatest albums of all time. Following its original release on standard LP, cassette and 8-track cartridge formats, the album was slated for Quadraphonic release in early 1977; this idea was ultimately dropped following the demise of the Quadraphonic format. However, 25 years later, the album was released in a Multichannel 5.1 DVD-Audio disc. Hotel California touched on many themes, including insanity, innocence (and the loss thereof), death, the dangers, drug addiction, temptation and transient nature of fame, shallow relationships, divorce and loss of love, the end results of manifest destiny, and the "American Dream." Members of Eagles have described the album as a metaphor for the perceived decline of America into materialism and decadence. In an interview with Dutch magazine ZigZag shortly before the album's release, Don Henley said: “ This is a concept album, there's no way to hide it, but it's not set in the old West, the cowboy thing, you know. It's more urban this time (. . . ) It's our bicentennial year, you know, the country is 200 years old, so we figured since we are the Eagles and the Eagle is our national symbol, that we were obliged to make some kind of a little bicentennial statement using California as a microcosm of the whole United States, or the whole world, if you will, and to try to wake people up and say 'We've been okay so far, for 200 years, but we're gonna have to change if we're gonna continue to be around.' ” The album's final track, the epic "The Last Resort", was about the demise of society. Glenn Frey on the Hotel California episode of In the Studio with Redbeard explained about the track: “ It was the first time that Don took it upon himself to write an epic story and we were already starting to worry about the environment...we're constantly screwing up paradise and that was the point of the song and that at some point there is going to be no more new frontiers. I mean we're putting junk, er, garbage into space now. User-contributed text is available under the Creative Commons By-SA License; additional terms may apply.