Album: Blood on the Tracks 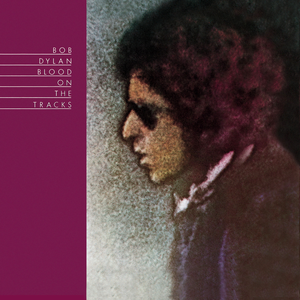 Blood on the Tracks is singer-songwriter Bob Dylan's 15th studio album, released in 1975 by Columbia Records, which marked Dylan's return to Columbia after a two-album stint with Asylum Records. The album, which followed several years of lukewarm reception for Dylan's work, was greeted respectably by fans and critics. In the years following its release, it has come to be regarded as one of his very best albums — making it quite common for subsequent records to be labeled his "best since Blood on the Tracks." It is also commonly seen as a standard for confessional singer-songwriter albums; though Dylan has denied that the songs are autobiographical, his son Jakob Dylan has stated: "The songs are my parents talking." Most of the lyrics on the album revolve around heartache, anger, and loneliness. In 2003, the album was ranked number 16 on Rolling Stone magazine's list of the 500 greatest albums of all time. The album reached #1 on the Billboard U.S. pop charts and #4 in the UK. The single "Tangled Up in Blue" peaked at #31 on the Pop singles chart. The album remains one of Dylan's all-time best-selling studio releases, with a double-platinum US certification to date. User-contributed text is available under the Creative Commons By-SA License; additional terms may apply.