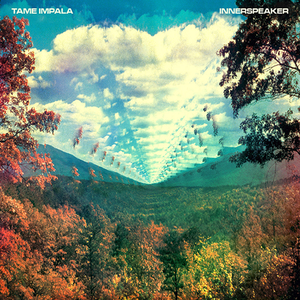 Innerspeaker is the debut album by Australian psychedelic rock band Tame Impala, released by Modular Recordings on 21 May 2010 in Australia. Most of the recording was undertaken by Kevin Parker. Tame Impala had previously released their self-titled EP in 2008 and single "Sundown Syndrome" in 2009. In the lead-up to the release of Innerspeaker, four small video snippets were released through their YouTube channel, showing them practicing the songs, "The Bold Arrow of Time", "Island Walking" and another instrumental piece. The album contains two re-recorded songs, "Desire Be, Desire Go" (previously released on their self-titled EP) and "The Bold Arrow of Time" (previously recorded, but unreleased). Past Tame Impala releases were done by Kevin Parker purely for his own enjoyment. Innerspeaker marks the first time Parker has "recorded something for an intended release. In the past [he has] just recorded a song, then done another two weeks later and eventually put them together." While Tame Impala tour as a band, it is Parker's personal music project in which he writes and records all the music to. Commenting on this, Parker said "Tame Impala is just one sliver of the giant amount of noise-making that we do as a circle of friends. I don't feel bad doing the recording by myself because I don't expect that input in their bands...to us Tame Impala is just Kevin Parker's project and everyone has a project" and "Tame Impala has always been a solo project. It has two halves: one half is the recording side which is very calculated and pieced together, and the other side is the live side, where we take what's been recorded and turn them into live songs." Parker has been recording music solo for a long time, as he explains "I’ve always recorded music. When I was 12, I used to set up two tape machines and multi-track myself. First, I’d record a beat on the drums, then, I’d play that tape into another tape recorder while playing keyboard; then I’d take that tape and play bass guitar along with the drums and keyboard. I’d keep adding instruments. I did that for a long time until my dad bought me an 8-track, and then I continued recording music by myself, even if I was in other bands at the same time." Parker's father "played a lot of music as a hobby" and was a "big influence" on Kevin. User-contributed text is available under the Creative Commons By-SA License; additional terms may apply.