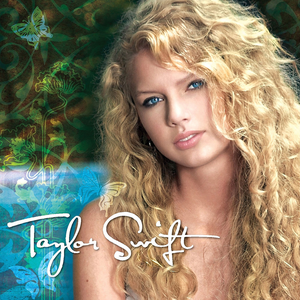 Taylor Swift is the debut studio album by American singer-songwriter Taylor Swift, released on October 24, 2006, by Big Machine Records. Swift was 16 years old at the time of the album's release and wrote its songs during her freshman year of high school. Swift has writing credits on all of the album's songs, including those co-written with Liz Rose. Swift experimented with several producers, ultimately choosing Nathan Chapman, who had produced her demo album. Musically, the album is country music styled, and lyrically it speaks of romantic relationships, a couple of which Swift wrote from observing relationships before being in one. Lyrics also touch on Swift's personal struggles in high school. Five singles were released from the album, all of which have been certified platinum by the RIAA. "Tim McGraw" was released as the lead single and reached the top ten on Billboard's Hot Country Songs. "Teardrops on My Guitar" was released as the second single and was the album's best-charting song on the Billboard Hot 100. "Our Song" was released as the third single from the album and was Swift's first number one on Billboard's Hot Country Songs chart. It made her the youngest person to single-handedly write and perform a number one song on the Hot Country Songs chart. "Picture to Burn" and "Should've Said No" were released as the fourth single and fifth singles from the album, respectively, and both were successful on the country charts in the United States. Swift promoted the album by performing on tour as the opening act for artists such as Rascal Flatts, George Strait, Brad Paisley, and Tim McGraw and Faith Hill. Taylor Swift was received positively by contemporary critics, who praised Swift's talent at such a young age. The album enjoyed commercial success and launched Swift's career in country music. In the United States, it topped the Top Country Albums Chart for 24 non-consecutive weeks, and was certified five times platinum by the Recording Industry Association of America (RIAA) for sales of over 5 million copies. Taylor Swift has logged 275 weeks on the Billboard Top 200 chart as of early 2013. The album was also successful outside of Swift's native country, especially in Canada, Australia, and the United Kingdom. The album has sold over 6 million copies worldwide as of January 2015. User-contributed text is available under the Creative Commons By-SA License; additional terms may apply.