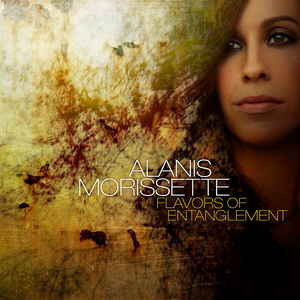 Flavors of Entanglement is the seventh studio album, fifth international release and last Maverick Records release by Canadian singer-songwriter Alanis Morissette. The album, which was originally set for an April release, was released May 30, 2008 in Germany, Benelux and Ireland, released internationally on June 2 and in the United States on June 10. It was produced by Guy Sigsworth. The album has sold 233,000 copies in the USA and over 600,000 worldwide. Flavors won a Juno for Pop Album of the Year at the 2009 Juno Awards. The album gets its name from a lyric in the track "Moratorium". Flavors of Entanglement received generally positive reviews from music critics, praising the new style of Morissette's album, however critics felt the album wasn't as original as Morissette's former albums Jagged Little Pill and Under Rug Swept. Charting success of the album was also moderate worldwide. The album peaked at number eight on the U.S. Billboard 200. The album also spawned an American tour called Flavors of Entanglement Tour, which spanned September to November 2008. Morissette left Maverick Records following completion of all promotional activities in support of the album. User-contributed text is available under the Creative Commons By-SA License; additional terms may apply.