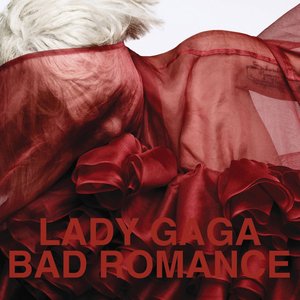 “Bad Romance” is a song by American recording artist Lady Gaga from her third extended play, The Fame Monster (2009). A collaborative effort between Gaga and RedOne, the lyrics of “Bad Romance” explore Gaga’s attraction to individuals with whom romance never works, her preference for lonely relationships and the paranoia she experienced while on tour. Following an illegal demo leak, Gaga showcased the final product at Alexander McQueen’s show at the Paris Fashion Week in October 2009, followed by the release of the single’s cover art. Musically, “Bad Romance” features a spoken bridge, a full-throated chorus and sung lyrics about being in love with one’s best friend. The song, which is imbued with elements of Germanesque house and techno, as well music from 1980s and the 1990s, was touted by Gaga as an experimental pop record. The song contains a few lines in French. User-contributed text is available under the Creative Commons By-SA License; additional terms may apply.